Fu Ping was a recipient of the Distinguished Achievement Award from the Department of Computer Science of University of Illinois in 2012. The biographic sketch on her included the following paragraph on their award web site:


Before starting Geomagic in 1997, Fu was the director of visualization at NCSA, the University of Illinois supercomputing center, where she supervised work on Mosaic, the world’s first practical web browser. Her team also developed new geometry algorithms that enabled the morphing special effects for the robot villain in the movie Terminator 2.

Upon a recent inquiry, however, the school indicated that they could not find any records pertaining Fu Ping being a director at NCSA or her involvement in the Mosaic project.

Previously, the school has released employment records of Fu Ping at NCSA, which showed that she was only a programmer there when Mosaic was developed and a manager later. 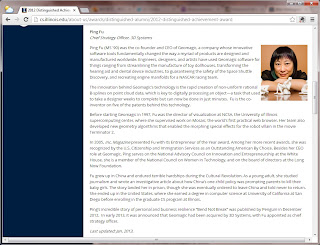