The Original Story:
On Pages 251-252 of Bend, Not Break, Fu Ping described in amazing detail how her Red Maple Society got into trouble by publishing an article that caught Deng Xiaoping's attention:


Toward the end of my second year at Suzhou University, our group was invited to attend a conference in Beijing with the publishers of literary magazines from ten other universities. Since we were not ranked a first-tier school, this was a tremendous honor. The Red Maple Society slaved for weeks to create what we considered our finest magazine yet. And in doing so, we took a huge risk: we choose to include an article written by a student titled "A Confession of a Communist Member," which compared Mao's Little Red Book to the Bible...

We made a special cover for this issue, and I spent many nights had printing copies. We then sent our representative from our inner working group to Beijing for the conference and distributed the publication around Suzhou. But the meeting never happened. The government decided at the last minute to ban the gathering of the ten universities  deeming it illegal. Instead, it was announced that China's de facto leader, Deng Xiaoping, would receive the representatives for a private meeting.

This was when things went terribly wrong. Every representative who attended the special meeting with Deng had a copy of the Red Maple Society's current magazine in hand. Deng asked  to see what people were reading. One student from Beijing University passed him a copy of our magazine with its pages opened to the "Confessions" article, which was considered daring and controversial.

"A Communist member questions his own party?" Deng asked with his eyebrow raised after quickly skimming the article...

To prove her tale, she provided a couple of pictures showing the magazine they produced, named Wu Gou: 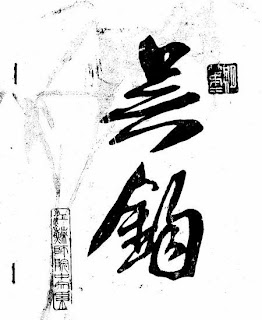 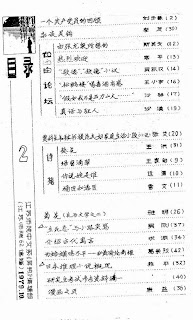 The first picture shows the cover while the second picture is the Table of Content page, with the "Confessions" article being the first item.

The Changing Story:
Tania Branigan and Ed Pilkington of The Guardian also looked into this tale and reported:


Perry Link, an expert on modern Chinese literature at the University of California at Riverside, said student magazine representatives met in 1979, but added: "I do not believe for a moment that Deng Xiaoping ever came near the group."

Neither he nor others knows of a representative from Fu's group, Red Maple, attending. Fu said she believed the article was selected for This Generation, the joint publication from the meeting, but Link's copy shows it is not included.


And in an e-mail to me, she admitted she made mistakes about a magazine she said she helped edit, called Wugou, or “No Hook,” produced in 1979 by students at her college, then called the Jiangsu Teacher’s College (later it changed its name to Suzhou University, she said.) It was not that magazine but another one, This Generation, that was taken to a meeting in Beijing of student magazine writers from around the country, she wrote in the e-mail. “A good case that shows everyone’s memory can be wrong,” she wrote.

[Note: Didi Kirsten Tatlow made a translation error above: Wu Gou does not mean "No Hook," but a hook-like weapon used in the ancient country of Wu, close to where Suzhou is.]

The Debunking:
There are many parts of Fu Ping's story as well as her clarifications that are false. Indeed, the only parts that are true are her statements that Suzhou University is not a first-tier school and that they had published an issue of magazine that contained the "Confessions" article. Alas, neither of which is even helpful to her tall tale.

First of all, once again, her timeline is all wrong. As Professor Perry Link stated, student magazine representatives did meet in Beijing in 1979, on July 15 of that year in fact. This makes it at the end of Fu Ping's first year in college, not "second year." But wait, Fu Ping's Red Maple Society was founded only in the fall of 1979! Oops. Big Oops.

Suzhou University, named Jiangsu Teacher's College at the time, was indeed not a first-tier school. It would be quite remarkable for them to get an invitation to that meeting. The fact is that it wasn't. No school from Jiangsu province attended the meeting. (Incidentally, there was a magazine named Red Maple represented in that meeting, but it was from Jilin University in northern China where red maple trees are much more prominent than Suzhou in the south.)

For those who can read Chinese language, here is a detailed account of what happened at that time from someone who was actually there.

The group had a productive meeting in Beijing and encountered neither Deng Xiaoping nor any political trouble. They then returned to their respective campuses and founded the journal This Generation. If Deng Xiaoping were going to meet them at that time, there would have been neither Wu Gou nor This Generation for him to pick up and pick upon.

However, Fu Ping's tale of Deng Xiaoping's involvement is not entirely made up either. The above account also remembered that, on January 16, 1980, Deng Xiaoping did make a speech criticizing the magazine This Generation, labeling it a counter-revolutionary propaganda, with a copy of that magazine in his hand. Consequently, This Generation ceased to exist after her very first edition.

Fu Ping probably heard of this story and thus conveniently substituted This Generation with her own Wu Gou and claimed the story for herself. When that was exposed, she quickly pivoted and claimed that she "believed the article was selected for This Generation." Her belief proves to be as erroneous as her facts.

Perry Link is once again correct that the only issue of This Generation did not include the article Fu Ping mentioned from Wu Gou, as seen in its table of contents below: 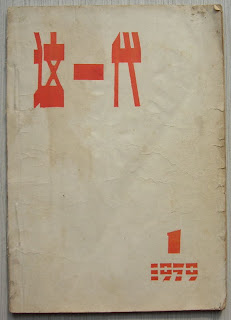 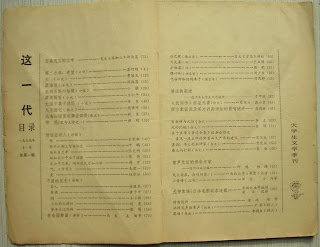 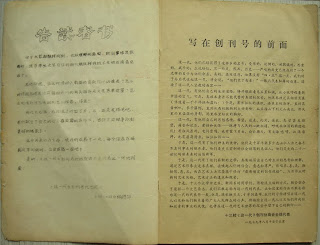 This Generation got into political trouble because of her own contents, having nothing to do with Fu Ping's little group or journal.