The Original Story:
In Bend, Not Break, Fu Ping provided a photo of her in a group under a big Red Guard flag. 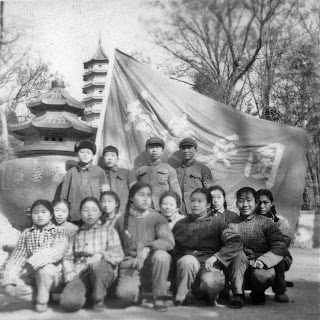 The photo was not mentioned directly in the book itself, but it has the following caption:


When I lived in the dormitories, I spent much of my time with students my age. During our mandatory study sessions, we recited slogans from Mao's Little Red Book. I am second from the right in the bottom row.

The Later Clarification:
After being widely questioned whether the picture shows that Fu Ping was a Red Guard herself, she clarified:


In the Fast Company story image, you and other kids are wearing Red Guard armbands under the Red Guard flag, yet you claim you were not a Red Guard.

If you zoom into that picture, you only need to look closely to see I have no red band on my arm. The image was taken in front of a Red Guard flag at the school that I attended in the late 70s. I wrote in the book that the situation got better after 1972. Still, I was never a Red Guard.


The Debunking:
There are several issues, some of which are blatant lies, in her clarification.

First of all, she now admits that she was attending school in the "late 70s". Yet her original caption was insisting that she was in "study sessions," not school. She was spending time with "students my age", implying that she was not a student herself.

She states that the picture was taken at the school, as if the flag was just a coincidental background. That is not true. The background of this picture is not any school, but a famous park in Nanjing. It is obvious that the picture was a record of an organized field trip in which they had brought out the flags and arm bands of the Red Guard to display their revolutionary spirits.

It is not as clear whether Fu Ping was wearing an arm band herself in the picture. She insists that she was not. But some people have taken up her challenge of zooming into that picture. The result may be convincing to some but skeptical to others. It is a case that you have to know what to look for to see it: 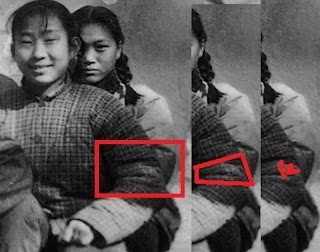 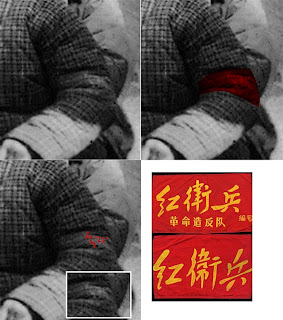 What is clear, however, is that most, if not all, other kids in the picture are wearing the Red Guard arm bands. It would be quite odd if Fu Ping was the only one without it and yet was allowed to join the group in their field trip.

In late 1970s, Red Guards was no longer their initial incarnation in 1966 but more or less an honor organization parallel to the Communist Youth League, which later absorbed and disbanded Red Guards altogether. Although no longer radical or violent, Red Guard nonetheless maintained a political standard that excluded "bad elements." Given that Fu Ping was possibly a member of the Red Guard herself, or at least very close to them, her entire story of being prosecuted during the Cultural Revolution has to be in serious doubt.

Update (6/20/2013): Suzhou University disclosed that their records show that Fu Ping had become a member of the Chinese Communist Youth League in 1973, before or when she started high school. The Youth League is the precursor organization for Chinese Communist Party and only very selective few could gain acceptance, unlike the Red Guards which had a much wider membership. It's extremely unlikely Fu Ping could gain acceptance of the Youth League without being a Red Guard earlier in those years.