The Original Story:
In Bend, Not Break, Fu Ping tells one of the most significant events in her college life on Pages 250-253:


Halfway through our first semester, my friends and I formed a group called the Red Maple Society. We decided to publish a literary magazine composed of our essays and poems, as well as articles about events taking place across campus and in Suzhou. I was elected editor in chief...

Over the course of the next year and a half, our magazine grew quite popular -- and not just among the university students or in Suzhou... our professors endorsed us, and the university itself printed the magazine...

Fu Ping provided a picture of their group to a Chinese online media: 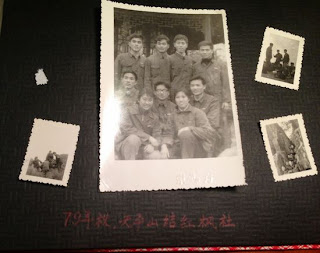 The caption in the above photo says "founding Red Maple Society at Taipin Mountain, fall, 1979". The main picture was reproduced in Bend, Not Break.

The Changed Story:
Tania Branigan and Ed Pilkington of The Guardian took an interest in this story and did a little ask around:

Yinghong Cheng, now a professor of history at Delaware state university, studied at the same time and in the same building at Suzhou as Fu, and had his own literary group. He told the Guardian: "I am completely unaware of that group [Red Maple] and publication, and if it had been that popular I would have known about it."

Fu, who supplied a copy of her magazine, said her contemporaries might not have heard of the society because it was underground.

The Debunking:
During the years Fu Ping was in college, 1978-1982, editing and publishing unauthorized student journals became quite fashionable. It is therefore quite natural for her, a student of Chinese literature, to be involved in such activities.

But Fu Ping presented her Red Maple Society as quite popular in her school and beyond, endorsed by professors and the university itself (before it supposedly ran into political trouble later). Yet Professor Cheng Yinghong who was in the same school at the same time was "completely unaware of" it!

Fu Ping's only response was "because it was underground," so much so that her contemporaries never have heard of it. So, where was the popularity?

By the way, the photo above stated that the Red Maple Society was founded in the fall of 1979, a full year after she started college based on her revised timeline, not "halfway through our first semester."

Of course, there are still more to this student journal story, and each of them turned out to be false...