The Original Story:
In Bend, Not Break, Fu Ping stated that she spent her early childhood in Shanghai and lived together with the Shanghai family in a "grand home," as described on Page 9:


Our family house was peaceful rather than showy, a three-story and three-section villa connecting to a courtyard with a front gate that opened onto the main street of our neighborhood. Surrounding the complex, a stone wall decorated with an ornate iron fence shielded the serene interior from the unpredictable outside world.

And she has a photo to prove it: 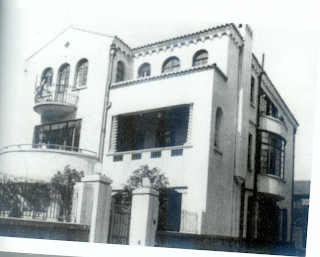 Curiously, however, she provided no photo of her family with the house.

On Page 10, she provided a few more details on the location of the house:

I didn't know the villa had been confiscated by the government and divided up. But I found Shanghai Mama in the one room that had been left to her and Papa, on the second floor.

Much later, in 1993, when Fu Ping made her first visit home from America, she found her Shanghai family still lived in the same house (Page 110):

Shanghai Papa complained to me about our villa, where he and Mama continued to live. At the start of the Cultural Revolution, they had been forced into one room. The house had been co-occupied by a newspaper agency and several other families. Slowly the government returned a few more rooms to them, but never the entire house.

The Debunking:
Fu Ping's description of the house being divided up and occupied by others rings true -- it was a common practice during the Cultural Revolution.

The problem? Nobody has been able to locate this house. The headquarters of the Soviet Friendship Society had later become the Shanghai Exhibition Center, which is indeed close to the Nanjing Road. Yet, according to many people who had walked the neighborhood, there was no sign of a house like Fu Ping described.

Could the house have been demolished since then? A house with such a stylish character that had survived to at least 1993 will be more than likely to be preserved. Besides, as recently as February 20, 2013, Fu Ping was quoted by Didi Kirsten Tatlow of the International Herald and Tribune in a complain about her critics:

They smear my name, they try to get my daughter’s name on the Internet, they sent people to Shanghai to surround my family and to Nanjing to harass my neighbors.

Well, it is of course impossible to surround her family in Shanghai if no one could locate the house they live in. But taking at face value, Fu Ping's above accusation clearly indicated that at least some members of her Shanghai family (her Shanghai parents have since passed away) are still living in that villa.

Then, where is this mysterious villa?