The Original Story:
In Bend, Not Break, when Fu Ping was led to her assigned room 202 and found her sister there, it was a room filled with trash. Later, on Page 48, she described what she did to the room:


By that time, I had thoroughly cleared the trash out of Room 202, scrubbed the walls and floor clean, and begun forming a makeshift homestead for Hong and me. For a bed, I found a thin, stained single mattress next to the trash collection site. Sometimes as I wandered around campus, I would come across a chair with a missing leg or other discarded small household items, which I'd bring back to our dorm room.

The condition did not change as late as 1970 when her "Uncle W" came to visit and sat on that broken chair. Or on the Chinese New Year in 1972, when she hosted a dinner party for her then-returned mother (Page 123):


Nanjing Mother brought them into our tightly packed dorm room. We had pushed our mattress against the wall in order to accommodate an additional table and several chairs that we had borrowed from our neighbors.


The Debunking:
The lack of beds and other furniture in her room could very well be true given the circumstances. Except that it was not.

How do we know that? Fu Ping included in her book a photograph of her and her sister in that very room, taken by one of her Shanghai brothers who was visiting her in 1972: 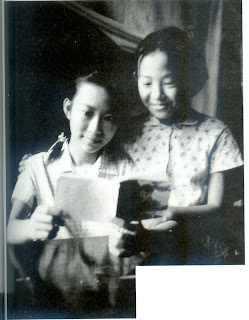 In this picture, one can clearly see that they had a fairly large desk with a shiny surface and a two-level bunk bed with something resembling a mosquito net. It's not much, but hardly a picture of poverty either.

Could their living condition dramatically changed in the months between New Year and when this photo was taken (which appears to be summer time)? Possible, but not likely. There was no mention of any life-changing events in 1972 in her book.

Oh by the way, both girls appeared to be healthy and happy in the picture, with no signs of malnutrition whatsoever.