We have already examined the impossibilities of Red Guards driving vehicles in 1966, now let's look at another detail in Fu Ping's Red Guards story: that they were all wearing boots.

The Original Story:
Boots-wearing Red Guards appeared in several places in Bend, Not Break. On Page 17, when they first appeared at her Shanghai home:


Suddenly, I heard a crash echoing from the courtyard below. Next came the heavy beating of boots entering our home, and then voices from the living room on the ground floor.


A smell of rot from the Red Guards' heavy boots triggered my first onset of a migraine headache, which would continue to plague me for life.

Then, On Page 81, she was wearing a pair of boots herself in a "military training camp":


My boots, hand-me-downs from the military camp, did not fit properly. The shredded back of the left boot rubbed my heel until several blisters the size of thumbnails erupted.

Just so that we are clear that the boots were not just another frivolous results of Meimei Fox's "searches on the internet," Fu Ping said the same in her own voice on PBS:


But one day I heard this loud noise and the boots marching through our backyard. Then I heard my mom crying, saying, “She’s so little.”


The Debunking:
The problem is that, in 1966, there were hardly any boots available in China. Red Guards typically fashioned themselves with army uniforms which in footwear consisted of what it was called the "liberation shoes" (解放鞋): 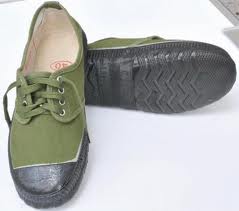 The shoes have rubber bottoms and cloth tops. They are indeed notorious for bad smells but they are most definitely not "heavy" or able to create the sensation of "heavy beating" or "loud noise."

Both Shanghai and Nanjing are cities in southern China where the heat in summer (when the above happened) can be repressive. Nobody would be wearing winter boots of any kind at that time. The only footwear that could resemble "boots" would be rain boots. But those are also made of light rubber and were not part of the regular attire for Red Guards at the time.